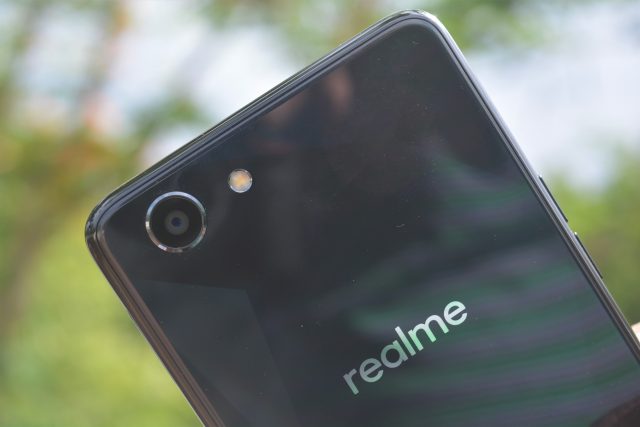 The Indian smartphone market is filled with good smartphone options for users in the mid-range segment and flagship segment. But it’s not quite there in the budget segment. Xiaomi has been offering budget-oriented smartphones and been on a spree of launching many smartphones that are almost same which creates a confusion. There was no real(pun not intended) competition in the market. But, a new sub-brand by Oppo aims to change this with its all-new smartphone Realme 1. Realme is a sub-brand by Oppo but from now the brand will be operating independently. The smartphone sports some very good specifications like a powerful Helio P60 Processor, 3GB/4GB/6GB RAM, Face Unlock and more starting at a competitive price of ₹8,990. We have been testing the smartphone for quite some time now and this article is Realme1 Full Review.

Realme1 comes in a striking red colour box with the brand name written in bold letters. The back of the box contains the usual information. On opening up the box, you will the Realme1 smartphone itself wrapped in a plastic. On further digging in, you will find another small box that houses the user manual, warranty card, SIM ejector tool etc. It is then followed by a Silicone case, Wall Adapter, and Micro USB cable. That’s it for the box contents. 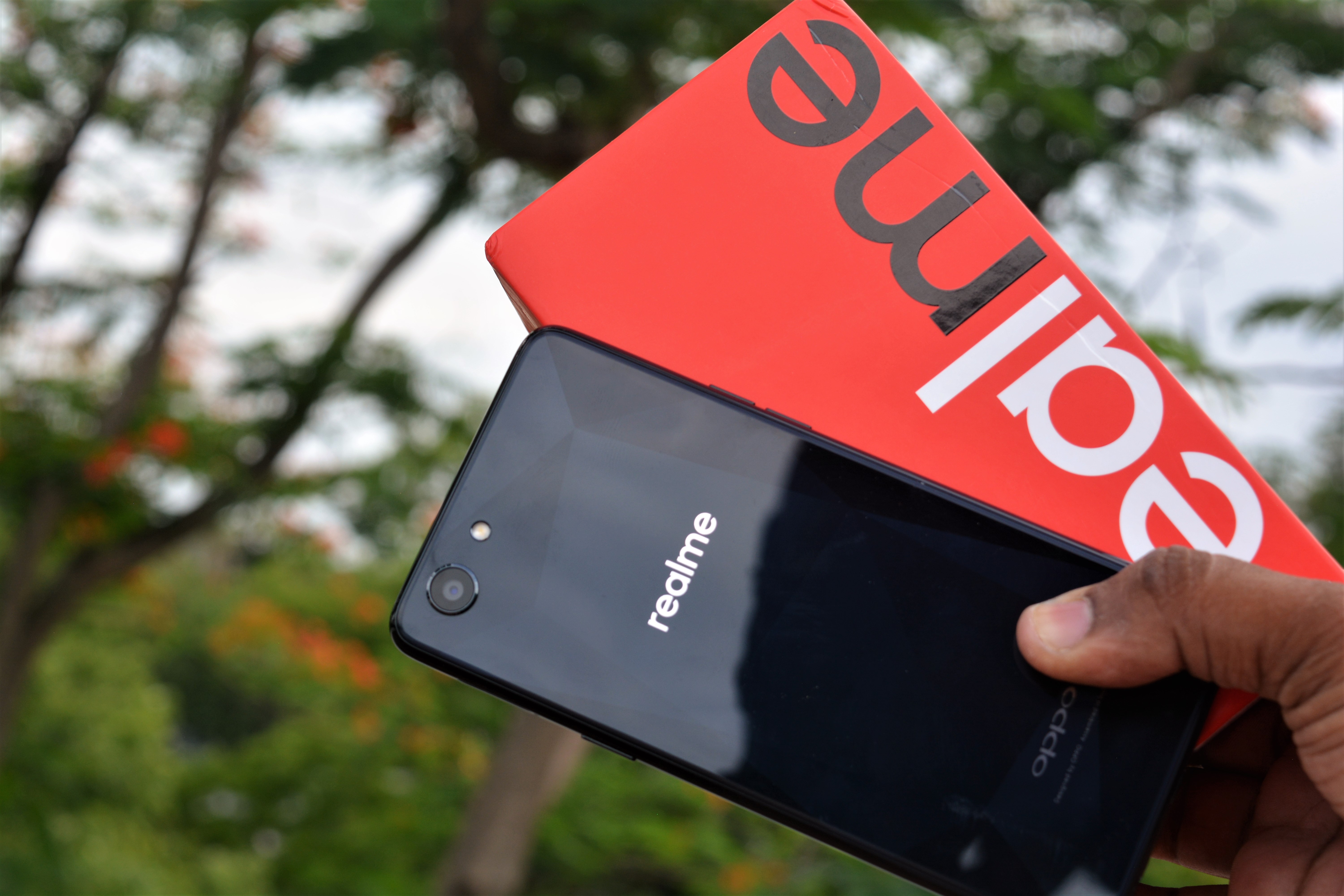 Realme 1 smartphone stands out from the crowd with its unique back. The company calls it Diamond Black Design and is one of a kind on a smartphone in this segment. The design is extremely unique and looks classy. When it comes to the build quality, Realme 1 doesn’t feel like a cheap smartphone. Although the build is predominantly plastic, it feels quite good in the hand. Overall, the build quality is quite good. 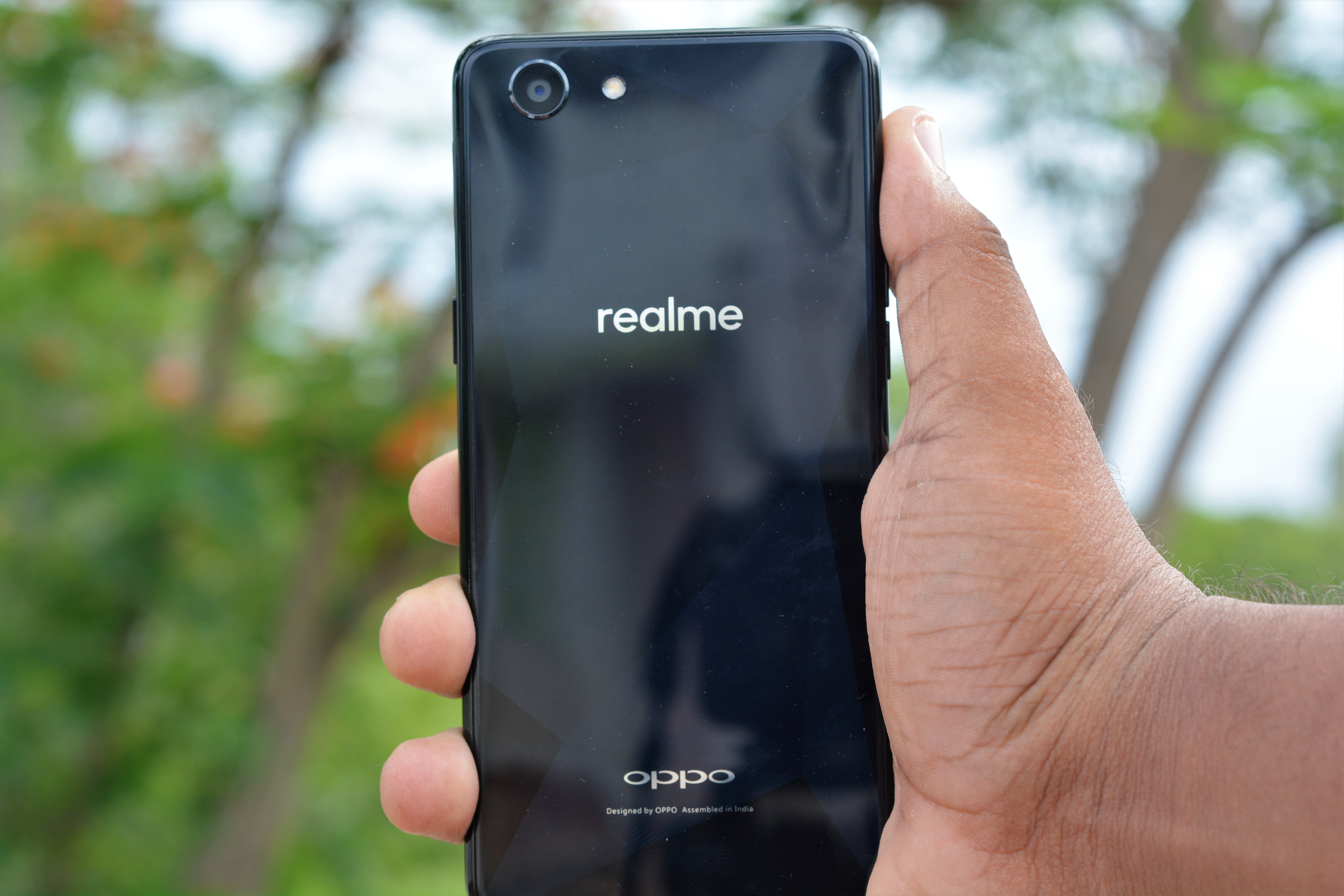 Before moving on to the technical aspects of the device, let us see more on the physical overview of the Realme 1 smartphone.

To the front, you will find the huge 6″ FULL HD+ display that has an aspect ratio of 18:9 with narrow bezels. 18:9 displays the trend in the smartphones launching in 2018. There is also an 8MP front-facing camera, earpiece and usual set of sensors. To the left, you will find the volume rockers button and to the right, you will find the power ON/OFF button along with Dual SIM+Micro SD tray. Yes, you heard it right! This smartphone supports Dual Nano SIM Cards along with a MicroSD card. 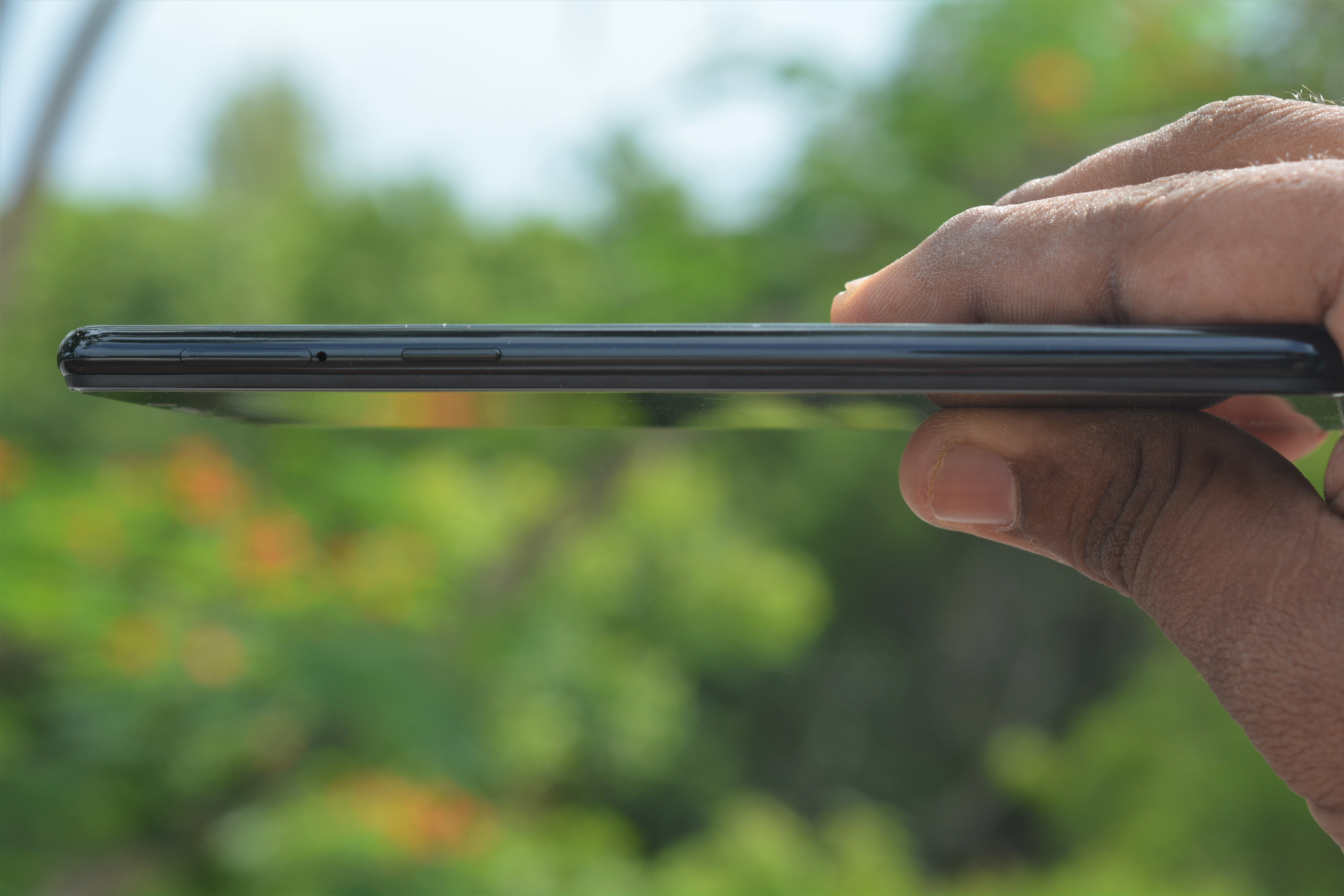 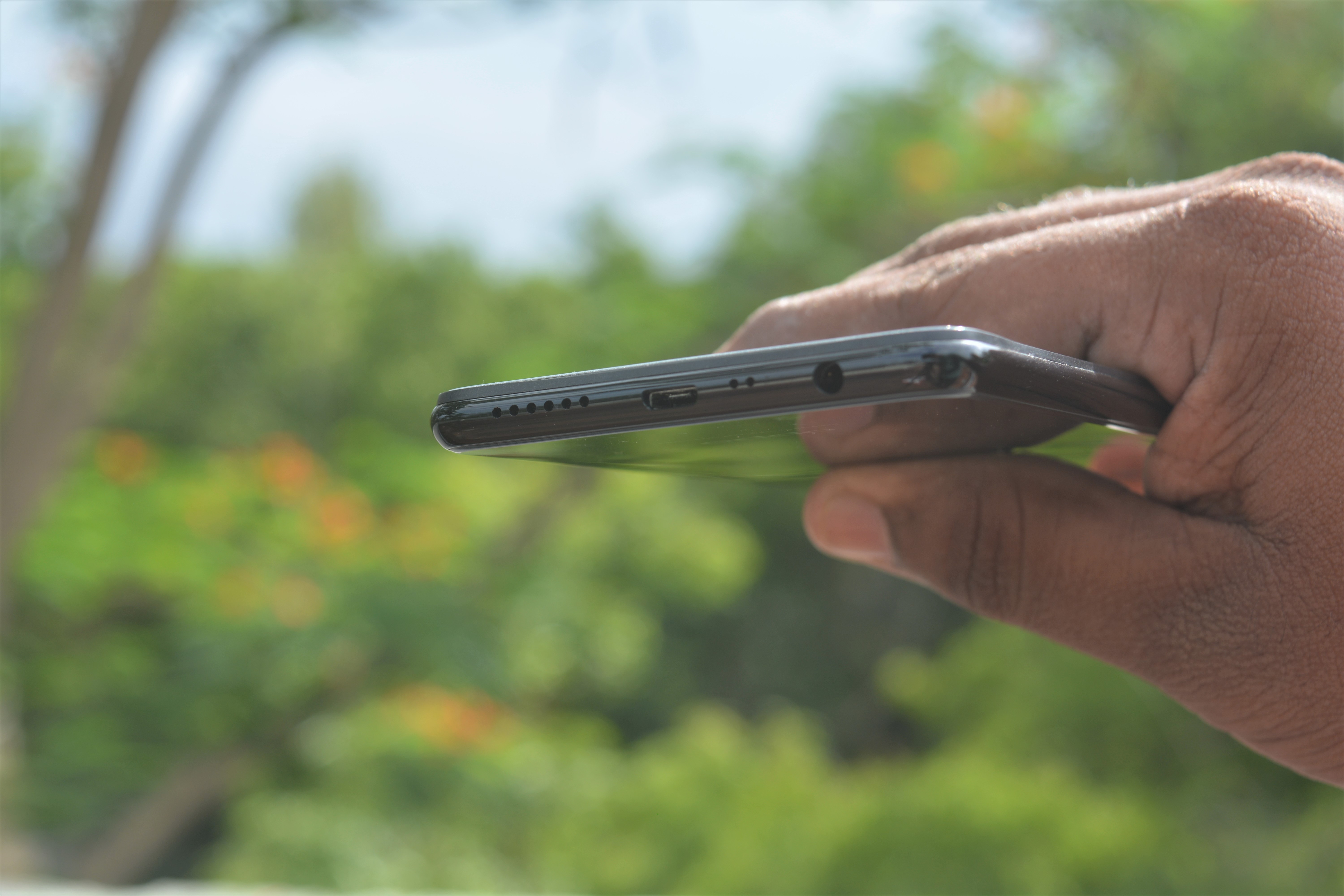 Realme 1 sports a huge 6 inches FULL HD+ display which has as an aspect ratio of 18:9 and comes with a resolution of 2160 X 1080 pixels. As the bezels are narrow, thanks to the 18:9 aspect ratio, it doesn’t feel like a smartphone with 6″ display.

When it comes to the display quality, the panel used by Realme is good and the sunlight visibility is also good. The colours are well saturated and the overall quality of the display is good. 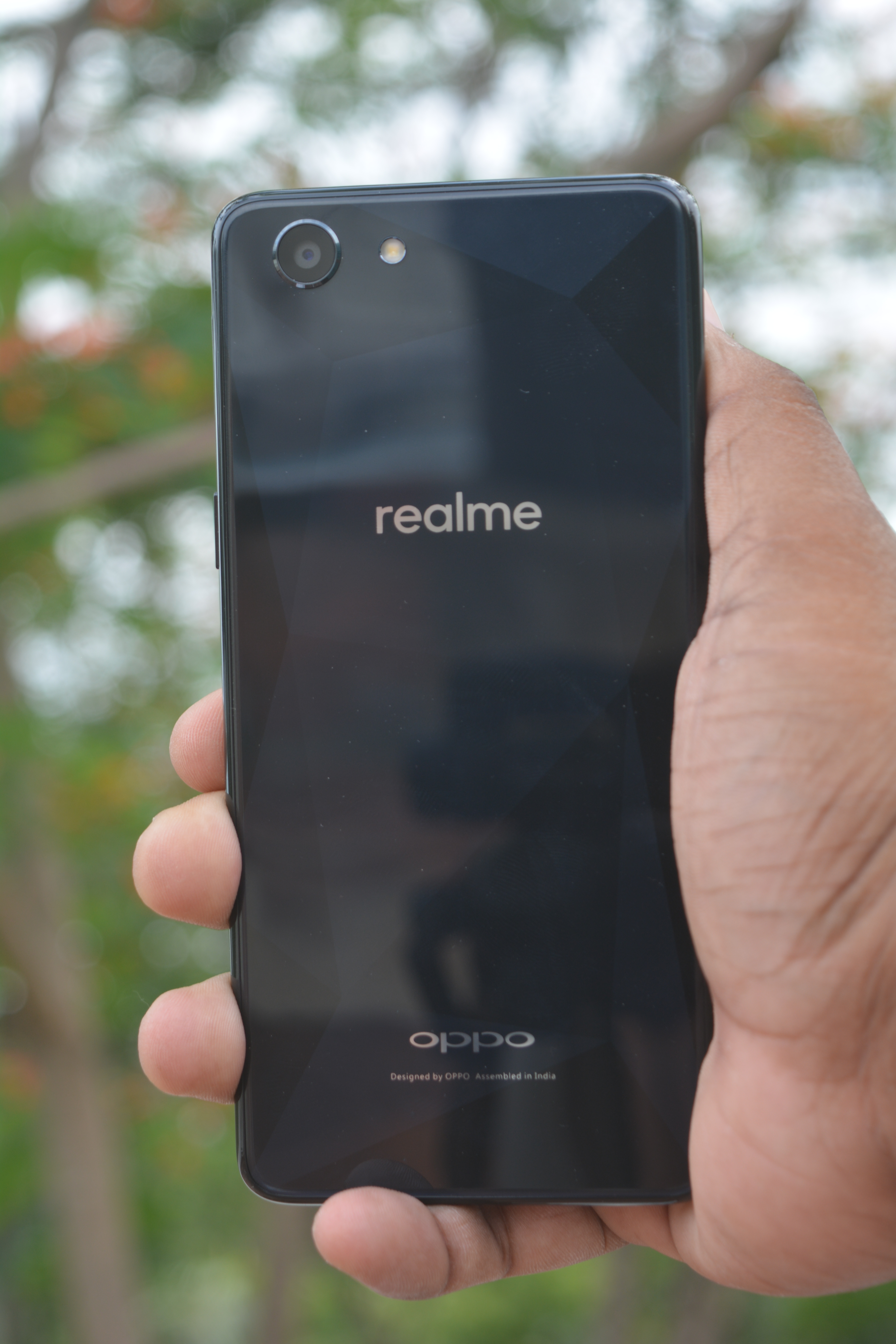 Realme 1 sports a MediaTek Helio P60 octa-core processor that is clocked at 2 GHz. Helio P60 from MediaTek is a powerful chipset and found in smartphones that cost almost 2 times the cost of Realme 1. The unique selling point a.k.a USP of this device is its performance. Realme 1 handles any task thrown at it with ease. The day to day usage with this phone is a breeze. When it comes to gaming and other graphics-intensive tasks, the smartphone handles it quite good and the gaming performance is quite good.

Overall, the performance on the Realme 1 is very good.

Realme 1 runs on a custom skin by Oppo called Color OS. This smartphone runs on Color OS based on Android 8.0 Oreo. The skin is heavy and a lot plethora of customizations have been done by Realme on this device. It isn’t a steep learning curve, but it takes some time to get used to the software. Realme was talking about a lot of AI features that have been baked into the software. For instance, the camera app has an AI mode which detects the scene and takes the picture accordingly. On top of that, we can see AI being implemented in battery and general performance too.

Realme 1 is backed up by a 3410 mAh battery with AI optimizations. The battery life on this smartphone was a mixed bag for us. With casual usage, the smartphone lasted up to 1 and a half days. But with moderate and heavy usage, we had to charge it at the end of the day. The supplied charger in the box is a 5V 2A adapter and it charges the smartphone quite fast. We hope that Realme 1 optimizes the battery in the future updates.

Realme 1 sports a 13MP camera that has an aperture of f/2.2 and the front-facing camera is an 8MP shooter. Although the trend of dual cameras is making news around, Realme decided to go with a single rear camera. 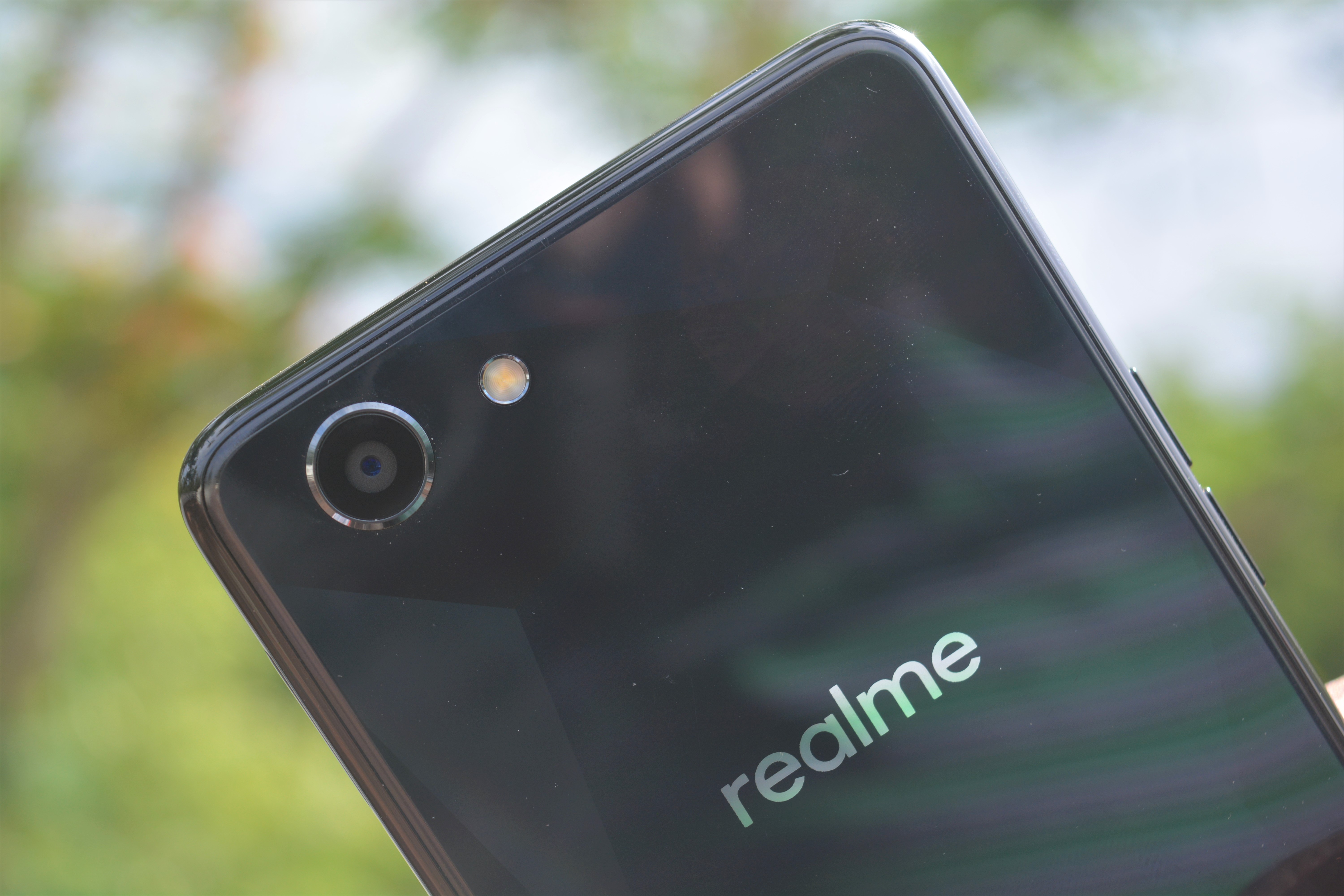 When it comes to the camera quality, it is decent for the price at which the smartphone is selling at(base variant). The pictures shot during daylight come out very good and there is a good amount of the detail in the pictures. The HDR mode is quite aggressive and the pictures turn out to be very good. When moved to low lighting and artificial lighting, the camera performance takes a slight dip. The images are bright but there is quite a bit of noise in the pictures which is expected in budget-oriented smartphones. When it comes to video quality, it is also quite good.

The front-facing camera is an 8MP shooter with AI beautification. The selfies turn out to be good and there is quite an amount of detail. One thing to mention is that AI mode does well in front facing camera but the regular beautification mode is very aggressive.

Here are some of the samples taken from Realme 1 smartphone.

You might be wondering why there is no mention of Finger Print scanner till now. It is because Realme has included a face unlock feature replacing the fingerprint scanner. The face unlock is very quick and it unlocks very fast. During dark situations, it struggles to detect the face but manages to unlock in most situations. We liked face unlock on this device a lot and kudos to Realme for optimizing the feature to get the most of out it. 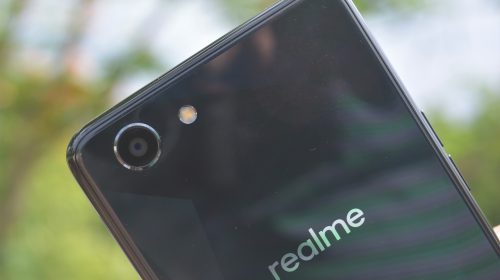