HTC Edge Sense gives users the ability to activate advanced touch and use a “short squeeze” as well as a “squeeze and hold” for enhanced functionality. With a simple squeeze, users can quickly launch camera, flashlight and do more actions. The squeeze behaviour can be customised in settings. HTC U11 also has the highest score in DXO Mark. U11’s camera has got a score of 90 which surpasses Google Pixel and Samsung Galaxy S8. It also comes with HTC U Sonic which is an intelligent personal audio with multiple AI assistants. 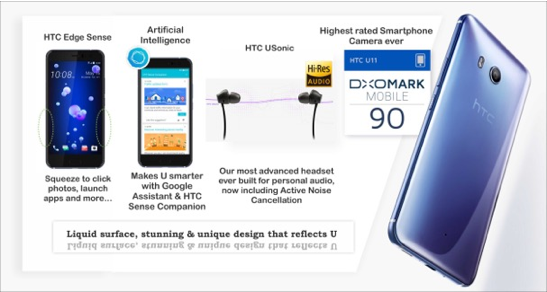 Specifications of HTC U11:

Commenting on the launch Mr Faisal Siddiqui, President South Asia, HTC had this to say

We are proud to present our flagship smartphone – HTC U11 which showcases HTC’s power of innovation by bringing to discerning customers pioneering technologies that are game-changers in the industry and reflect our strong focus on R&D and Design. HTC U11 comes equipped with unique features like Edge Sense that opens the doors to a whole new world of phone interactions. We are particularly proud of the fact that the U11 camera has achieved an incredible DxOMark 90 score, making it the highest rated smartphone ever in DxOMark history also making it the #1 smartphone camera on the market today. We are confident that the HTC U11 will set new industry standards

HTC U11 will be available both online and in offline stores from last week of June 2017. Amazon India is the online partner for HTC U11.The smartphone will be also available in HTC India E-Store and preorders start from 17th June. It will be available in two colour options, Amazing Silver and Brilliant Black.