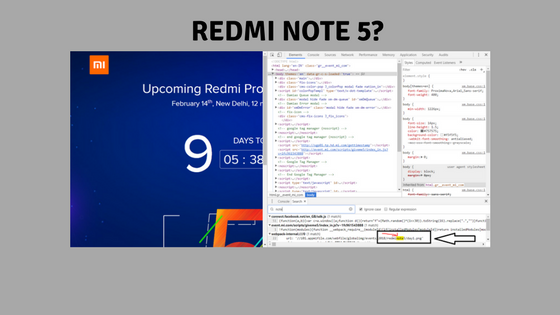 Xiaomi Redmi Note 4 was a huge hit in India and this is the time when we see new leaks of the next Redmi smartphone. We have been seeing a lot of leaks and rumours of the new Redmi Note 5 off late.

Today, Xiaomi sent out media invites for a product launch on February 14 in India which just says 5. There are no other details mentioned about the launch. Many reports suggest that Xiaomi might launch Redmi 5 and Redmi 5 Plus in India.

But a recent leak in the inspect page element of the teaser page in Mi.com reveals that the smartphone might be Redmi Note 5. Here’s a screenshot of the same

As you can see from the above image, with a quick search on the source code/ inspect page element, a file named RedmiNote5/day1.png is revealed. This shows that there are high chances that Xiaomi might launch the Redmi Note 5 in India on February 14.

OS: MIUI 9 based on Android 8 Oreo

We will be knowing more information on February 14 and we will update the page then!